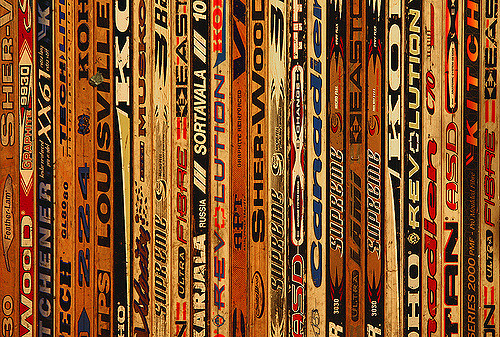 “Hockey Sticks In A Bar” by Dan Zen – used under CC BY 2.0 / cropped size from original

The Detroit Red Wings playoff streak currently stands at 24 years in a row, the longest current streak of post-season appearances in all North American professional sports. From front line-scouting and middle management to the Executive level, this organization is the model for succession planning.

The City of Detroit began a steep decline as a result of mass closings of workshops and factories in the manufacturing sector. In 1989, the first-round draft pick of the Red Wings, Steve Yzerman, scores a career-best 65 goal but was unable to progress past the first round of the playoffs against the Chicago Blackhawks. In the following season, Yzerman scored 62 goals, but the team was unable to make the playoffs.

The management of the Red Wings realized the potential in the player and took the opportunity to introduce star players to complement Yzerman, in hopes of winning the Stanley Cup. While this resulted in back to back championships, the Red Wings management recognized the shrinking market of Detroit and needed a shift in team structure philosophy.

The final ingredient is, in my opinion, the most important.

While the average company does not have a payroll of $50 million like the Red Wings, (and even then they are still small compared to high revenue teams such as New York or Chicago) the matter of assessing talent and growing the team to identify the next leaders can be applied to both sports organizations and businesses.

What are your ways of mimicking this success without the budget of a sports franchise?